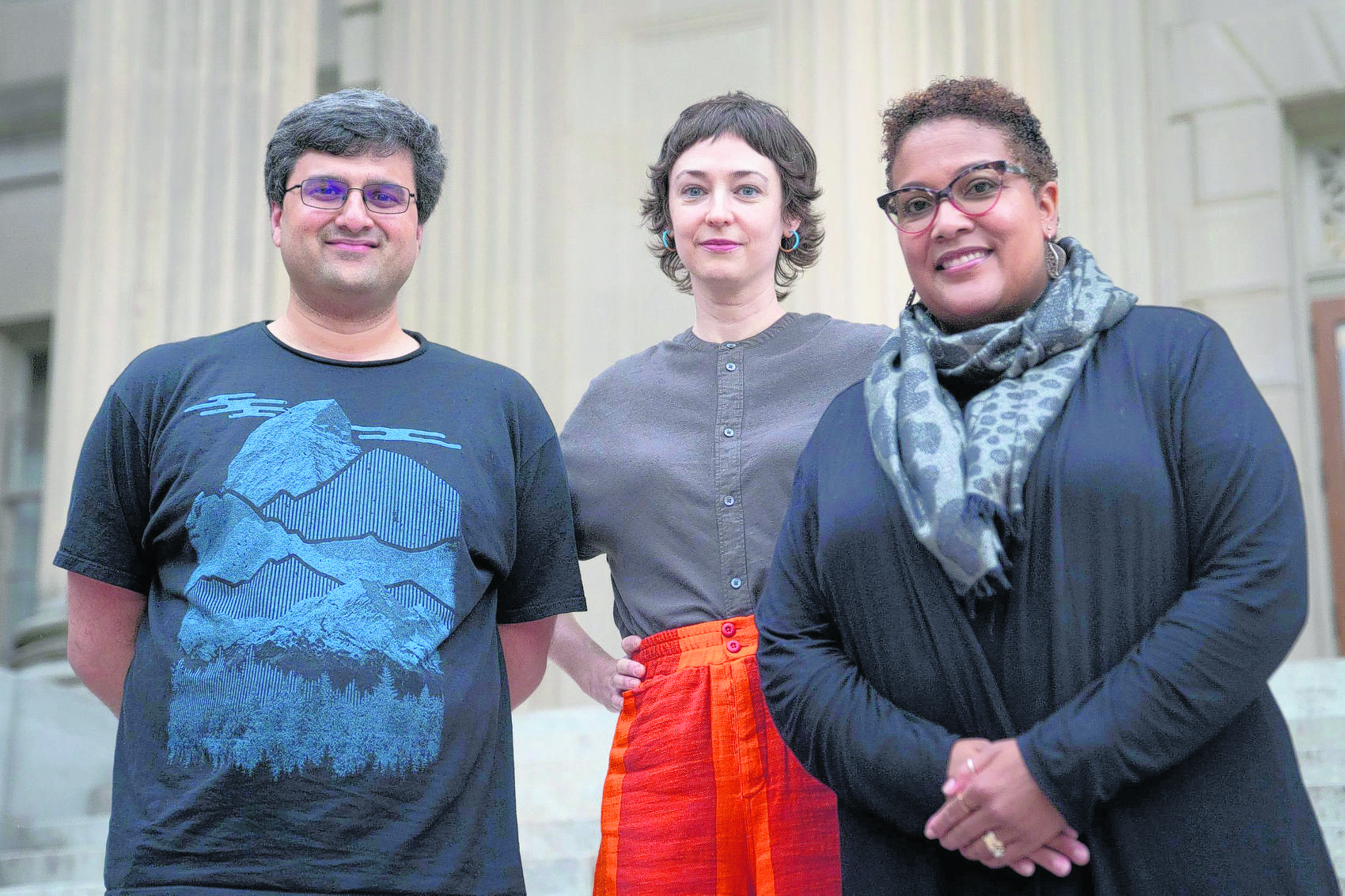 Apricots. The War of 1812. Grant Hill. The second season of “Grey’s Anatomy.” Tables.

There are 6.5 million Wikipedia entries in the English language alone, and over the past two decades, this ever-evolving, user-generated platform has achieved a level of credibility to go along with its popularity. In an average month, the site registers more than 18 billion page views worldwide. It’s not 100% accurate, but it has far from crumbled under the weight of online misinformation.

Wikipedia is largely maintained by a group of invested volunteer editors called Wikipedians, some of whom organize into smaller networks based on interests or geography. One of the few states to have its own Wikipedian group is North Carolina.

Since forming in 2015, the North Carolina Wikipedians have spent hours writing pages, pinning citations to facts, identifying untouched subjects to research, and recruiting new contributors to a project they believe is more a movement than an encyclopedia.

“(Wikipedia) feels like something that couldn’t actually be possible, but it seems to be working pretty well,” said Gaurav Vaidya, a Semantic Web technologist in Chapel Hill who made his first edit in 2002, in only Wikipedia’s second year. Back then, the nascent platform had basic information gaps: Vaidya, for example, believes he created the first page for “The Catcher in the Rye.”

In the 20 years since, he has edited 1,347 pages, which he deemed “an embarrassingly small number.”

The North Carolina Wikipedian group has 27 listed members. Group chair Emily Jack said around a third routinely take on roles beyond editing that help foster a statewide contributor community. One major role is organizing edit-a-thons, where members of the public can join Wikipedians for hours, and sometimes days, writing entries on selected themes. Some are specific to North Carolina and some aren’t. In recent years, edit-a-thon subjects have included women in science, diversity in comics, and African-American history in North Carolina.

Jack is a typical North Carolina Wikipedian. She lives in the Triangle, works in academia, and edits under a username she declined to share, aware that feedback on the internet can be unforgiving. A librarian at UNC, she has edited 607 pages which, like Vaidya, she called “embarrassingly low.”

What makes Jack unique within the wider editing community is her gender. Surveys show around 85% of Wikipedia contributors are men, a statistic she would like to see change.

Jack explains Wikipedia is but one piece of a larger movement called Wikimedia, which includes platforms like Wikibooks, Wikinews, and Wikiversity.

Asked why she volunteers so much time to this wiki-verse, she paraphrased the words of Wikipedia founder Jimmy Wales: “The vision is to create a world in which every human can share in the sum of all knowledge.”

Every fact that goes into a Wikipedia entry needs to be sourced. Community standards dictate what makes a source reliable, and bots crawl pages looking for sentences without citations and notifying editors when changes get made to pages that don’t often get updated.

While even Wikipedia doesn’t recommend people cite the platform as a primary source, the online encyclopedia has risen in legitimacy since its inception. Some research shows Wikipedia’s accuracy is north of 80%, with many entries performing better. In today’s decentralized news landscape, one could do worse than checking on Wikipedia said Brian Southwell, a director at the RTI International Center for Communication Science in Research Triangle Park.

“I think that some of the earliest concerns with Wikipedia have faded over time,” said Southwell, who also teaches courses on communication and human behavior at UNC and Duke. “It’s tough to offer a judgment generally and overall, but I think with regards to certain topics that have a high profile, the corrective nature of the site has been helpful.”

Wikipedia challenges its editors to “be bold” when they see a way to improve a page, but some changes spark intense disagreement. At the top of every Wikipedia page, there is a “Talk” button that reveals all the challenges and decisions behind what is published. In these behind-the-page conversations, editors dispute issues as granular as word tense, word order, and phrasing.

For example, editors on Cary, North Carolina’s Wikipedia page have had a long-running argument over the inclusion of the acronym C.A.R.Y.: Containment Area for Relocated Yankees, which refers to the influx of northerners who’ve moved to the community. Including C.A.R.Y. on Cary’s page has been debated since 2005, when a user first demanded it be deleted. The acronym has since been challenged in 2006, 2016, 2018 and 2021.

A few years ago, a challenger wrote that because C.A.R.Y. “is more of an opinion rather than a known fact, it should not be included within the article.”

A North Carolina Wikipedian editing under the name Indy beetle responded with scholarly references. “For everyone’s benefit, I’ll note I’ve cited the claim (some time back) to a book about linguistics and dialect in North Carolina, published by a university press,” he wrote. “It is a fact that some people refer to the town this way, and the label has stuck as a cultural item.”

Not all exchanges are this civil; some back-and-forths can get snippy and personal. Vaidya said these quarrels, known as “Wiki Wars,” are an inevitable part of a large online community. Frank Jones, a digital marketer and WordPress developer in Greenville, said he no longer recommends new editors use their real names as their usernames.

“As with any internet community, there are some trolls,” Jones said. “You never know who’s on the other side getting into an argument with you and how they may want to escalate that argument. So, it’s often good to remain anonymous.”

‘Oh, this is a movement’

A research instructor at North Carolina Central University in Durham, Colbert-Lewis wrote her first Wikipedia page in 2018 after Jack urged her to contribute. The same year, the two traveled to Berlin to attend the global Wikimedia Conference.

“That was the moment when it occurred to me that, ‘Oh, this is a movement,’” Colbert-Lewis said.

Her editing credentials have impressed her students, and she encourages them to edit themselves, stressing “it’s very, very easy” to get started. The platform, Colbert-Lewis explained, has added a visual editor that makes the experience more like writing an email than writing code.

Overall, the North Carolina Wikipedians hope to expand the state’s pool of editors, both in numbers and in racial and gender diversity. “The more editors we have from different backgrounds, the less chance there is for bias to make it onto the site,” Vaidya said.

Among the most veteran Wikipedia editors in the group, Vaidya doesn’t have time to write much anymore but thinks the hobby is ideal for college-age students with the passion for painstaking research. There is also a project called WikiProject North Carolina, separate from the Wikipedian group, that helps systematize all entries related to the Tar Heel State.

The North Carolina Wikipedians stopped doing in-person edit-a-thons during the pandemic, but Jack said she hopes they will resume soon. This year, she helped coordinate a campaign called WikiPixNC, which invited North Carolina residents to upload photos of natural, cultural or historic interest from across the state.

“It was exciting to see how far and wide the campaign reached. Because this is the first time we did it, we had no idea what to expect,” Jack said. “In the end, not only did people upload more than 500 photos, but we really saw mountains-to-sea participation.”

For Jack, WikiPixNC was what she hopes all North Carolina Wikipedian projects will be: communal, welcoming, and helping contribute to a public truth.

This story was produced with financial support from a coalition of partners led by Innovate Raleigh as part of an independent journalism fellowship program. The N&O maintains full editorial control of the work.