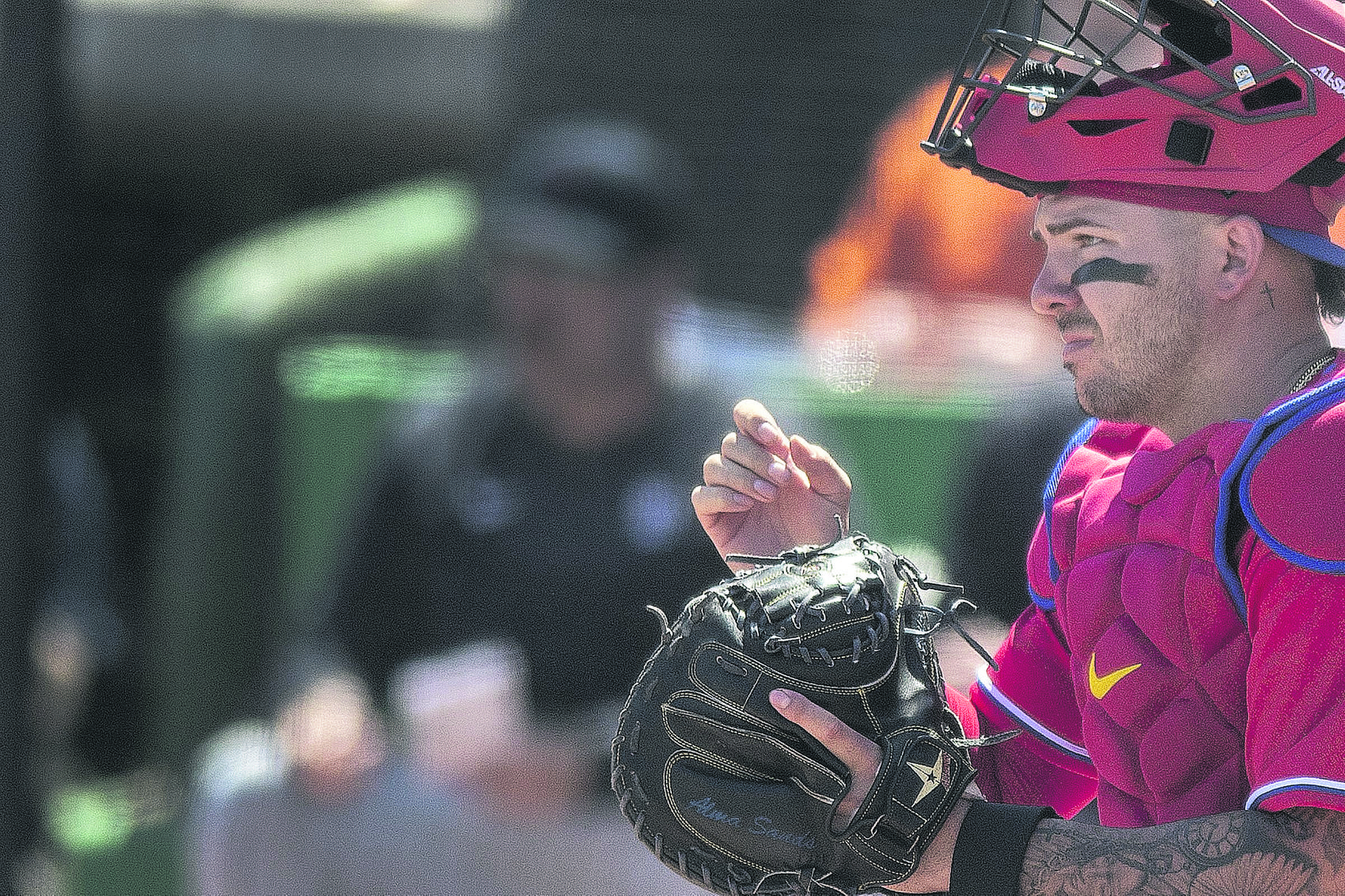 Acquired in an offseason trade with the Yankees, Donny Sands plays with nothing to lose. He already knows what it’s like to lose a father, what it’s like to lose a home. Now he finds himself in the midst of a competition for the Phillies’ backup catcher spot, behind J.T. Realmuto, and he’s enjoying it, because this is a game, and it should be enjoyable.

Catcher Donny Sands started the 2021 season in Double-A Somerset, but 39 games later was called up to Triple-A Scranton/Wilkes Barre, where he hit .272/.339/.476 with eight home runs through 42 games – and one passed ball. A few months later, the Yankees traded him to the Phillies with right-handed pitcher Nick Nelson for infielder TJ Rumfield and left-handed pitcher Joel Valdez.

CLEARWATER, Fla. It took Donny Sands three weeks to convince his mother, Alma, to sell her car. The Phillies catching prospect had just bought her a brand new Mercedes Benz with his signing bonus. It was pristine, but that was the problem. She didn’t want to drive it anywhere. The roads by their home in Tucson, Ariz., were full of potholes and dust. That type of vehicle belonged on pavement.

So for three weeks, with a Mercedes sitting in her driveway, Alma drove a beat-up 2006 Toyota Camry. That was a car she didn’t mind getting dirty. It had seen the most harrowing parts of their journey – including four evictions – and served as a home for Donny for seven months when he was in high school.

Donny’s father, Roger, passed away in 2012 from a heart attack. Alma had trouble finding work, and moved back home to Mexico a year later, where she cleaned houses and worked out of her brother’s dental practice. Donny stayed in Tucson with the Toyota Camry. He’d go to school, go to baseball practice, and drive the car out to Santa Rita Park. He put towels on the windows and roll them up, so they stayed put. And then he would go to sleep in the backseat.

The day he sold the Camry for $2,000, Alma cried. Tears of sadness, but also tears of joy, for the journey that her son was embarking on. She was in disbelief that Donny, who had been playing baseball with his father in the backyard since he was 2 years old, had been selected by the New York Yankees in the eighth round of the 2015 MLB draft.

At 18, her son was able to buy her a house and a Mercedes Benz. She used to take care of him. Now he was taking care of her.

Sands’ journey through baseball wasn’t going to be easy, but it never was going to be as difficult as the experiences he’d lived through by the time he showed up to Florida to join the Gulf Coast Yankees in June of 2015. Donny was playing third base at the time. At the end of that year, the Yankees’ minor league catching coordinator, Josh Paul, approached with him with an idea.

“How do you feel about catching?” Paul asked Sands. “You don’t have decide right now. Take some time and think about it.”

To work on his reaction time, he and the team’s catching coach, Hector Rabago, did a drill called “eyes closed blocking.” You shut your eyes and listen for a soft neon ball to come whizzing out of a pitching machine. Then you use your instincts to react.

Sands did “eyes closed blocking” drills six times a week. He worked on throwing twice a week, and receiving seven times a week. And he did this all before games.

“It’s always the chip on my shoulder,” Sands said. “When people struggle in baseball, it’s just baseball. That’s life. You go 0 for 4 and it’s baseball. It’s a game. I’m not sleeping in my car. If I got through that, I can get through this. I lost my dad. You can go through a lot of other stuff that’s worse than going 0 for 4.”

The drills began to pay off. By 2018, Sands had cut his passed balls down to eight, between 26 games through his rookie league and high-A seasons. He earned a spot in the Arizona Fall League in 2019. With the 2020 minor league season canceled due to the pandemic, Sands had time to continue to work on his defense, while cleaning up his bat path to make it more stable. When he returned to the field in 2021, it was clear that he’d elevated his game to new heights.

Sands started that season in double-A Somerset, but 39 games later was called up to triple-A Scranton/Wilkes Barre, where he hit .272/.339/.476 with eight home runs through 42 games – and one passed ball. A few months later, the Yankees traded him to the Phillies with right-handed pitcher Nick Nelson for infielder TJ Rumfield and left-handed pitcher Joel Valdez.

“Donny has been one of the top elite receivers in the game,” Rabago said. “He brings some stuff on both sides of the diamond, but I’d say his receiving was top 10 in the minor leagues in the past few years. And I think he’s going to do the same thing in the big leagues.”

Rabago and Sands talk about the big leagues as an inevitability. Sands’ right arm is covered in tattoos – his father’s initials and the day he passed away, his mother’s name, his favorite bible verse – but on his bicep, there are three blank stars. He says that when he makes the MLB All-Star Game, he’ll fill in the years.

Alma is enjoying it too. She doesn’t miss an inning, and hopes to see many more, perhaps when the Phillies are in Arizona. She and Donny could drive over to the ballpark in her Mercedes Benz, but in her heart, she’d know that it was the Toyota Camry that got them there.